In the subway, there was a Coca-Cola named Chapter Two. It was a nice Coca-Cola. It was friendly and nice. It had all its gas and energy and power. The End.

Fun with Dick and Jane 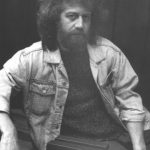